You Are Here:
Home
/
Shane Williams 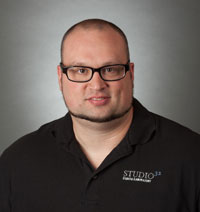 Shane began his career with Studio 32 in 2005, starting out in the model room. Since then he has become a waxer attending the Russell DeVreugd Posterior Guide to Morphology. Having a waxing background Shane was asked to become Studio 32’s digital technician. First with the addition of Ekton, Straumann’s scanner. He also received advanced implant training with the Ekton for designing custom abutments. Keeping up with technology, Studio 32 joined with 3Shape, sending Shane to advanced classes on design. Being versed with multiple scanners allows Shane to be knowledgeable on designing on several implant platforms ex: Straumann, Astra, Nobel, 3I, Zimmer. Growing up Shane was always interested with art, and this passion has helped him become the technician he is today.